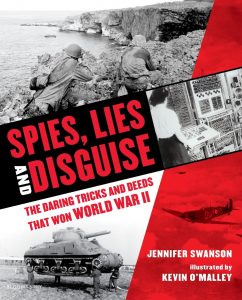 In the late 1930s, times were desperate. The world found itself at war again, less than twenty years after the first World War had ended. No one could quite believe it. And no one wanted it. The leaders of every country involved were left with no choice. They had to try to end the war as fast as possible, using whatever means they could.

That meant coming up with secret operations meant to deceive, deflect, and confuse their enemies. Poison the cattle that the Germans eat? Deliberately float a corpse dressed up as a spy across the water to have it wash up on Germany’s shore? Create a unit of top secret commandos with a license to kill? These were all real tactics attempted with the ultimate goal of defeating Hitler. In this off-center look at history, readers will be captivated by the classified and covert efforts made by each side as they tried to gain the upper hand and win the war. Restricted access is lifted to give the reader a peek into the top secret operations of the daring men and women who fought the war under a cloak of secrecy.