The Fall of the Mongol Empire 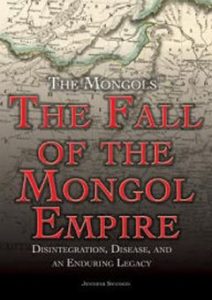 As spectacular as its creation was, the fall of the Mongol Empire was just as remarkable. Its descent into chaos was signaled by inter-family rebellion across the four khanates established by Genghis Khan. As weaker Mongol leaders struggled to retain control, drought, flood, famine, and the bubonic plague eventually contributed to the collapse of each khanate. As this volume amply demonstrates, though the Mongols were fierce warriors, their legacy also includes a culture of honor and discipline, centralized government structure, trade promotion and communication routes, and religious tolerance, all of which helped spread wealth, information, and technology across two continents.

At its greatest extent in the 13th and 14th centuries, the Mongol Empire stretched from northeastern Europe to northern China and the Pacific, and this well-written set covers its entire history, from founding to expansion and enormous influence to decline... The Mongol empire is an often overlooked part of history, and this set gives it the attention it deserves. VERDICT A first purchase for middle school and early high school students.