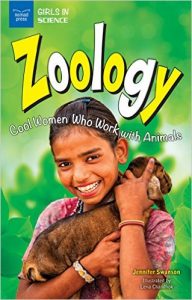 Love to work with animals? Zoology is the study of everything having to do with animals, including how and why they look, act, and behave in their environments and with other animals. As a zoologist, you might study how elephants solve problems or take care of tigers at a zoo.

Zoology: Cool Women Who Work With Animals introduces readers to three women in the field of zoology who are making an impact and inspiring the next generation of zoologists. Emily Kim is a graduate student in Canada studying different species of birds. Elise Newman works as a zookeeper at the San Diego Zoo Safari Park. Dr. Erin Seney is a sea turtle researcher with the University of Central Florida.